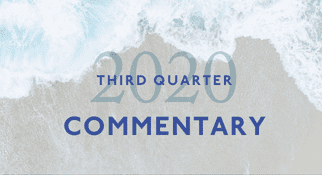 The restart to economic activity has been encouraging. Industrial production and manufacturing have shown strong snapbacks, and likely have some room to run as businesses press forward to match the recent uptick in goods demand. However, services likely will not participate in the same type of rebound seen in manufacturing until a vaccine comes to market. During the quarter, a second wave of infections took hold of several European countries, which prompted authorities to reintroduce restrictions on activity. Domestically, we experienced our “second” wave during the summer months, and luckily have not seen a similar surge in infections. With that said, the downward trend has slowed, with outbreaks across various colleges being the source of recent upticks in infections forming what may become a large third wave. The economic pain of these second and third wave infections have largely remained localized to COVID sensitive pockets of the economy (travel, tourism, live events, hospitality and energy). The economy has adapted, where the shift in the makeup of economic activity has been every bit as profound as the change in the level of GDP. Look no further than the massive multiples seen in tech and communication services stocks vs. the rest of the market. Virus dynamics will continue to dictate both the permanence of these adjustments, and the pace at which we move forward.